Just announced at GAMA – Warcry, a skirmish-level game for Age of Sigmar!
So far all we’ve got is the teaser video and a short piece of blurb explaining that this game is about chaos warbands clashing on their journey to the Varanspire, so lets see what we can make of it.

Well, that was quick! So lets take a look in more detail. First off, this is from the same team that brought us Kill Team and Warhammer Underworlds, so we can probably expect something decently fast-paced like those games. But that’s not what we’re really interested in, is it? Lets face it, we’re here for the models!

The first shot shows us something of the new miniatures, plus some nice scenery.

An armored chaos warrior, wielding two spiked hammers (funny, only the other day I was thinking Warhammer doesn’t actually have many Warhammers in it nowadays.)

We’ve also got a hanging skeleton in a gibbet, and a bell hung between two columns – which also have skeletons of their own.

Next up, lots of new chaos minis running over wooden planks balanced atop… oh hey, that looks very much like new arches and walls compatible with Azyrite Ruins. Hopefully this is the start of modular scenery similar to the Industrial/City terrain in 40K. We’ve been told that the minis for Warcry are all-new sculpts, so that’s a bunch of new Chaos figures we’ll be getting, in a variety of poses and with a range of weaponry. You can also spot the winged creature in there – chaos mutations, perhaps? I wonder, is it too much to hope for modular “build your own Chaos mutant” figures? At the very least, though, it looks like we’re getting figures aimed at a variety of warband types, so maybe something similar to the themed Necromunda gangs?

Nice close-up here of one of the new Chaos warriors.

And another shot of some of the new minis on the new scenery. That looks like more of the ramshackle boards on existing walls, with ladders and platforms. The game has something of a Mordheim feel to it – although personally I *really* want to see less of the Azyrite stuff and more of the mortal realms cities like Hammerhal – imagine fighting over the rooftops of medieval buildings? Although that feels unlikely, as I can’t see how the chaos warbands would be getting near the more civilized areas (at least, not without getting too distracted with the pillaging to get to the Varanspire!) Still, I can hope!

More shots, the winged creatures/warriors seem fairly common, so maybe that’s the theme of one of the warbands?

Some kind of beastmaster-type with his “tame” creature?

More of the winged guys, plus another look at the scenery showing that it’ll stack nicely.

Close-up on the winged creature. Some kind of gargoyle demon? Or is this one of the chaos tribes?

And more creatures. Chaos hound mutant with wings? Even if Warcry ends up being terrible (which I doubt, honestly), we’re getting a ton of shiny new minis!

Another scenery shot. Some kind of collapsed pillar at the bottom left? A platform with spikes, more walls, columns, and wooden supports. This all looks pretty awesome – again, even if you’re not interested in Warcry, the scenery alone looks great for AoS – something it’s desperately in need of, especially since the Chaos Dreadhold kits are no longer available.

And a skeleton tied to a spike. Glad to see that they haven’t, for once, overdone it with the skull themes. No giant skulls moulded into every wall, just actual skulls dotted around and the occasional complete skeleton.

Are these our Warbands? This implies there’ll be six of them (the magic number – we’ve got six Necromunda gangs, too)

And finally we’re told all of this is coming in Summer 2019. More information as soon as we get it! 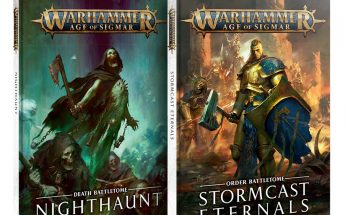