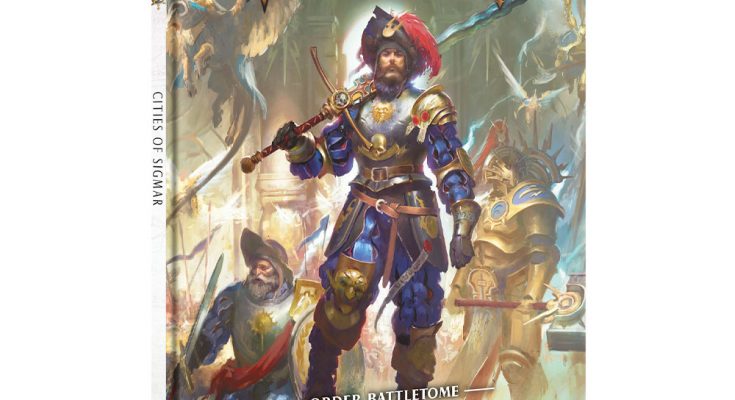 This is the first in a new series of columns that outline retired miniatures in new codexes and battletones, along with suggestions on which rules you might be able to use as a substitute if your opponent is willing.

Today, we’re looking at the new Cities of Sigmar Battletome, and which miniatures are no longer usable compared to the previous lists available in Grand Alliance: Order.

Cities of Sigmar covers a number of subfactions – the Freeguild, Devoted of Sigmar, Collegiate Arcane, Darkling Covens, Dispossessed, Ironweld Arsenal, Phoenix Temple, Order Serpentis, Shadowblades, Scourge Privateers, and Wanderers. Many long-time Warhammer players will have models for these armies from the World-that-Was, as they represent the AoS incarnations of the former Empire, Dark Elves, High Elves, Wood Elves, and Dwarfs – the majority of models are repackaged versions of the last available sprues for those armies.

However, no model is produced forever, and Cities of Sigmar removes a number of options that used models no longer available for purchase. This may disappoint a few players who had favorites amongst those removed. Some subfactions are gone completely – while it might be argued that no mention means the original warscrolls in the Grand Alliance: Order book are still valid, the models themselves are no longer available for purchase, which means Grand Alliance: Order is almost certainly being FAQed out of play very soon.

While this article includes suggestions for substitute warscrolls, it’s also worth mentioning that GW intend to add withdrawn models to Warhammer Legends – however these do not come with a points value.

These seem to have been the hardest hit, with three of their four models now discontinued.

It seems the faithful of Sigmar have been relegated to history. Especially surprising here is the removal of the Warrior Priest, which had a fairly up-to-date plastic model and appeared relatively recently in Warhammer Quest as the Excelsior Warpriest.

The only miniatures remaining from this faction are Flagellants. Perhaps that’s something to be said about the state of the worship of Sigmar in the Mortal Realms nowadays!

These have survived mostly intact, with the only two removals being:

The loss of the Freeguild Archers may disappoint a few Empire players with ranks of them in their collection, but I personally felt the loss of the mounted Freeguild General to be a big hit – there was a decent plastic kit available with the option to build both a mounted and foot version (or alternatively, one could be built as a standard bearer.) Alas, the only Freeguild General now available is the plastic model formerly known as “Captain of the Empire”.

The former Empire Wizards have made it through without a dent. All four warscrolls from Grand Alliance: Order have been replaced with new versions.

Lets be honest, this always felt like a “we’ve got all these artillery models, what do we do with them?” afterthought. While most models are still legal, there’s three absences from the new list:

The Cannon and Organ Gun were starting to show their age, but the Gunmaster was a fairly recent plastic – and one that I felt had a lot of character. I must admit I have a particular liking for models that feel like real everyday individuals with quirks, and this one felt like an absent-minded professor with an array of looking-glass devices, the sort of model you’d happily use for the Age of Sigmar RPG. So, that one feels like a particular loss to me.

The “normal” Duardin that aren’t all bothered about living in a furnace and finding the lost bits of Grimnir, or flying around in airships, and another subfaction of Order that was useful for using those old Warhammer Fantasy models. While more than half the models survived the cut, there’s a few absences:

Well, that’s it for those old dwarven models, although you might be able to get away with subbing Thunderers as Irondrakes and Warriors as Ironbreakers or Hammerers.

Um, ouch…
The Eldritch Council are no more. The whole subfaction is now gone. That means no more:

This one is something of a surprise, because some of these models were being sold under the Age of Sigmar branding at launch in the old Spire of Dawn intro set – although this was admittedly a repackaging of the Warhammer Fantasy Island of Blood set. You can likely field Loremasters and Archmages as Collegiate Arcane Battlemages (who is to say they don’t allow Aelves in their number, after all?), and a willing opponent may be happy for you to field that Archmage on Dragon as if it were a Battlemage on Griffon.

The Lion who what now? Alas, the entire subfaction has gone, although it did only consist of two warscrolls:

White Lions can likely be fielded as Phoenix Guard without any problems, while the White Lion Chariots might feasibly be usable with the Drakespawn Chariots rules – look, it’s just that the aelves have been out in the sun a little and their Drakespawn look a little, um, lion-ey.

This looks like another one for the cutting room floor 🙁

You may be able to make a case for the Dragonlord as a Dreadlord on Black Dragon, and both Dragon Nobles and Dragon Blades as Drakespawn Knights, but it looks like mounted aelves in general are a thing of the past.

And another one bites the dust.

Again, Chariots might be usable as Drakespawn Chariots, but for Shadow Warriors – see below!

The Scourge Privateers managed to fight off all boarding actions and survive intact!

Another one that survived the cut completely – I’m especially happy about this personally, as I’ve got a WHFB Sorceress on Manticore conversion that I’m already subbing the Sorceress on Black Dragon warscroll with.

All three of their two warscrolls have made it into Cities of Sigmar!

Wait a second. All three?

The Shadowblades have also picked up those errant Shadow Warriors from the Swifthawk Agents, adding them to their ranks.

And again, no changes here!

I was expecting a big hit as outdated Wood Elves models are pulled, and it looks like I was on the mark:

Spellweavers can likely represent another form of aelven Battlemage, while Glade Guard wouldn’t be all that out of place with the Sisters of the Watch warscroll.

And that’s it for this Missing in Action. Next up we’ll be covering Orruk Warclans!